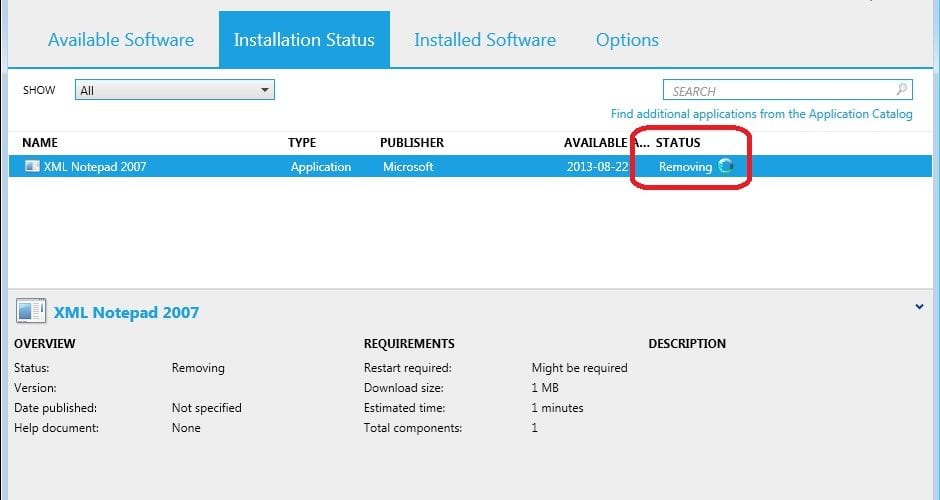 Uninstall an Application in Software Center with PowerShell

A member on the TechNet forums asked a question why a certain PowerShell script was not working on virtual machines, but it worked on physical. The member didn’t provide the whole script, but basically the primary function was to initiate a uninstall of an application in Software Center. I started wondering how hard it could be to actually accomplish this, these are my findings.
To see what applications are currently detected as installed and shown in Software Center, we’d have to explore WMI. The class we’re interrested in is CCM_Application. That class is available in the root\ccm\clientSDK namespace. In this post we’ll be uninstalling an application called XML Notepad 2007 that an user has installed from the Application Catalog.
We’ll begin with setting two variables that will be used later in the script. The first is the $ComputerName, that we set to the local machine. The $ApplicationName is set to a part of the name. It could also be the complete name of the application, if there for instance are several applications that has the “XML” in their name.

Next we create an object that we’ll use to invoke a method called Uninstall. This method is available in the CCM_Application class. In addition to that, we get the WMI object of the application we’re interested in and store that in a variable called $Application.

We already have the Id and Revision stored in variables, now we need to find out the rest.
IsMachineTarget
If we run the following code:

From the output we’ll get either True or False. What’s really happening here is if the application was deployed to a device collection, the output of the command above would be True. If the application instead was deployed to a user collection, the value would be False. Since we’re working with an application deployed to a user collection, we now know that the IsMachineTarget argument should be False.
EnforcePreference
EnforcePreference is quite self explanatory. Do we want to uninstall the application immediately, or more controlled. In this post we’ll uninstall the application immediately. So we should set the EnforcePreference to 0 (zero).
Priority
This argument is also quite easy to decide. Lets use High so we can uninstall it quickly. It’s a nasty software!
IsRebootIfNeeded
If we set this argument to True, the ConfigMgr agent will enforce a system restart. In this post we don’t want to do that, so we’ll set it to False.
With all this information known to us, we can now write the last line of code in this script:

Now if we put all the pieces together, we should have the following script:

Save the above script as e.g Remove-SoftwareCenterApplication.ps1 and run it non-elevated. The application will now be uninstalled from the computer. 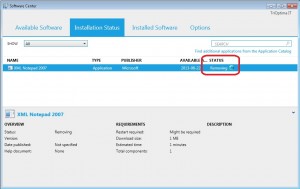