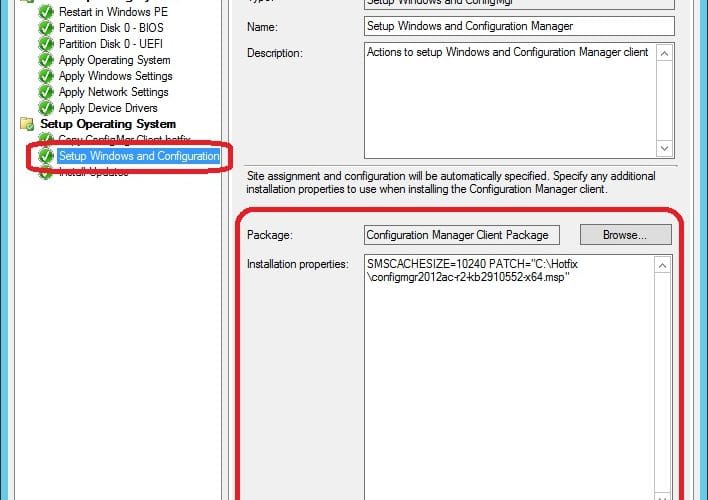 Microsoft has released a new hotfix that solves some problems that was discovered in ConfigMgr 2012 R2. One of them is the infamous slow download of WIM files during OSD. A specific hotfix for that issue was released earlier, but this new hotfix called KB2910552 includes the same hotfix released earlier and additional fixes. You can read more about this new hotfix here. As I’ve already stated, this new hotfix replaces the hotfix called KB2905002. So if you want to fix the OSD problems in ConfigMgr 2012 R2, the correct hotfix to deploy is KB2910552. This blog post will cover the steps necessary to take in order to install this hotfix for the ConfigMgr client during OSD. The method in this blog post is one that I’ve used for a very long time now and it has proven to be working in any scenario I’ve been using it in. So I highly recommend to install ConfigMgr client hotfixes by using this method.

In this post I’ll not go through the setup wizard of the hotfix itself, but I recommend that you accept to let the wizard create all the packages for you. These packages can be leveraged at a later stage to upgrade clients, stand-alone ConfigMgr consoles and site servers. What we’re interested about going forward, is the actual client msp files (hotfix files) that the hotfix setup puts in a certain location.

Once you have installed the hotfix, go to the installation location of ConfigMgr. In my lab environment, this is under D:\ConfigMgr. In here there’s a folder called hotfix. Whenever you install a hotfix for ConfigMgr, a subfolder named with the KB article number is created in this location. Open the KB2910552 folder and then the Client folder. In here there’s two folders, each containing a msp file that we’re after. The two files that we’re interested in are placed in the following location:
<ConfigMgr installation location>\hotfix\KB2910552\Client\i386\configmgr2012ac-r2-kb2910552-i386.msp
<ConfigMgr installation location>\hotfix\KB2910552\Client\x64\configmgr2012ac-r2-kb2910552-x64.msp 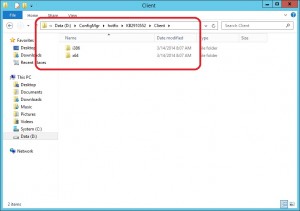 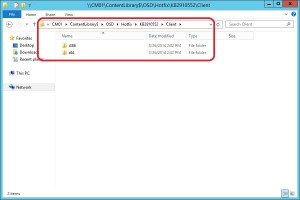 1. Open the ConfigMgr console and go to the Software Library node.
2. Expand Application Management, right-click on Packages and select Create Package.
3. Fill in the fields according to the picture below, remember to enter the correct source folder for your environment. Click Next when ready. 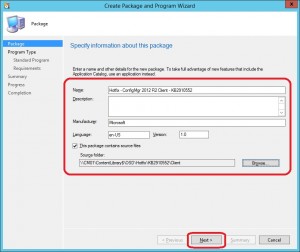 4. Select Do not create a program and click Next. 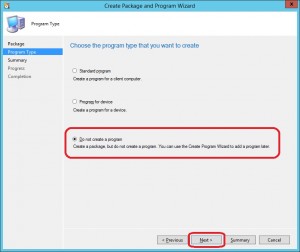 5. On the Summary page, click Next.
6. On the Completion page, click Close.
The package containing the hotfix files has now been created. But before we continue, we need to distribute the package to either our Distribution Points or Distribution Point Groups, depending on how it’s setup. Right-click on the newly created package and select Distribute Content. Complete the wizard before you continue.

We’re now going to edit the task sequence(s) that we use to deploy our desired operating system. First off we’ll create a Run Command Line step that will copy the hotfix file to a local folder. By doing this, we’ll not need to rely on access to certain network shares or worry about credentials and all that. Next we’ll amend the Installation properties field on the Setup Windows and Configuration Manager step, giving it the PATCH parameter pointing to the local hotfix file.
It’s important that you point to the correct version of the hotfix file when you edit the task sequence(s). For example, if you’re deploying Windows 8.1 Enterprise x64 like I’m doing here in this example, you need to configure the steps to reflect the x64 location and file name.
1. Open the task sequence(s) that you use to deploy your operating systems with.
2. Add a new Run Command Line step just above the Setup Windows and Configuration Manager step. Configure it accordingly: 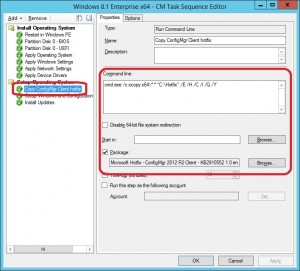 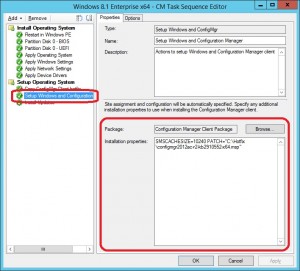 Note: The path to where the hotfix file is located should be on a single row, in the picture above it looks like it has been split into two rows, but that’s now the case. It should be like the following:

4. Click on OK to save the changes in the task sequence.
The next time that we deploy an operating system by using a task sequence that have these configurations, the ConfigMgr client version should be the following: 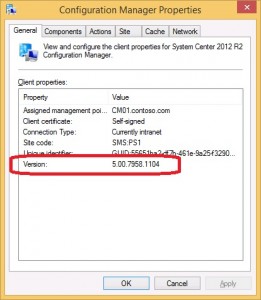