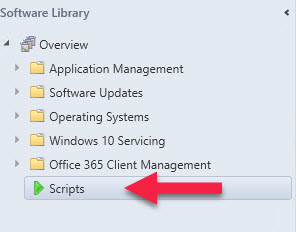 If you haven’t already upgraded to ConfigMgr build 1706 then you are missing out on one of the new and best features, the ability to near instantly run a script on a collection. The feature is still in its infancy and yes improvements needed and being worked upon, but the ability to run scripts without packaging them up is truly awesome and something I am going to explore in the below use case scenario.

Over the past number of years I have seen instances where some of our laptops have had their DNS suffix entries updated, not by the user but by what appears to be malicious code on some websites. This can cause issues accessing internal resources and external websites and also has a greater potential security issue, so this is something I had been watching out for.

I had another case this morning (pictured below) and thought I would make use of the new script feature and write up a quick script to get a near instant report on all machines with the number and list of DNS suffixes listed.

So here is the script I came up with;

The script in this case generates a CSV report with the following details;

So now we have a script that will report the required details we simply need to set up a network share for the report, taking into consideration that the share permissions will need allow for systems and not users to update the file. Once that share is set up we can put the script to work.

A prerequisite for deploying your own unsigned scripts is to perform the following actions;

Allow users to approve their own scripts

At this point you should now have an approved script.

Deploying the script is done in the in the Assets and Compliance section of the console. Simply select the device collection you wish to run the script against, right click on the collection and go to “Run Script“

Select the script you have just created and it will start running on the collection.

To ensure your script is executing on your clients you can go to the Monitoring tab and click on Scripts. From here you will see the script names and their current status on each of the devices you have targeted;

After a few seconds you should see the CSV being created on the specified share and the data size increasing as each of your clients reports their values into it. At the end of which you should have something similar to the below:

Here you will be able to see a list of computers which fall outside of the expected normal DNS suffix entries.

The next step for automatically remediation of this potential security issue is to create a Configuration Baseline.

For the Configuration Item Discovery Script use the following lines of code if you are looking for a set number of DNS suffixes (with the Setting Type set to Script and the Data Type set to Integer):

Monitor the Discovery for the set value of DNS entries expected on your network and for remediation you can either create an array containing your DNS entries to be applied, or alternatively just clear the DNS entries by using the following single line:

The new script feature in 1706 is without a doubt going to feature a lot in upcoming solutions from the community, so try it out and use it carefully too. In the mean time take time to thank the product team in Microsoft who listen to you the customer and the wider ConfigMgr community.