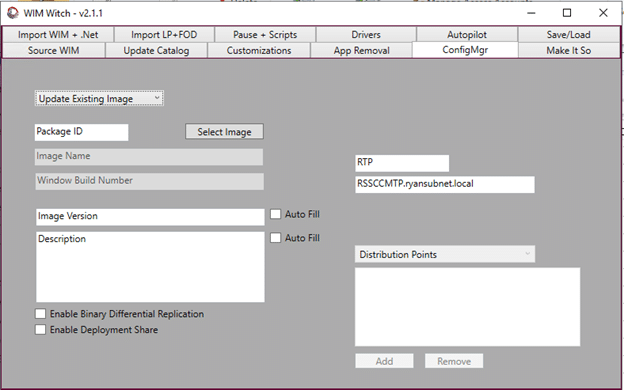 Author’s note: The release of Win10 2004 came before I had this post ready. As the code was ready, I opted to release the latest build to give users the ability service the new image without providing instruction.

This release of WIM Witch brings minor functionality enhancements to the user experience, and lays the foundation for ConfigMgr integration yet to come.

These fields are typically left for admins to fill out themselves. While they can be useful, generally they aren’t used. WIM Witch v2.0 allowed admins to manually populate these fields from within the WIM Witch UI, which can be handy, but v2.1 makes them useful.

With v2.1, checking the boxes labeled “Auto Fill” next to “Image Version” and “Description” will automatically populate these fields with metadata about the creation of the image. Version will be populated with a timestamp of when the image was finalized by WIM Witch, which provides admins a reference for how old the image really is.

The Description Auto Fill option populates the field with a list of customizations that were selected for the image creation. While not a granular list, it will easily tell the admins if OneDrive has been update, Software Updates applied, Language Packs injected, and more. At this time, she does not show exactly which updates were applied, nor specific LP’s, but that may be coming at some point in the future. For now, we can get an automatic high-level view of the image without having to look at logs.

By checking this box, every Distribution Point that has the image distributed will also add a Deployment Share for the content. While this feature may not be widely used, there were requests for it and it was a worthwhile deep-dive into the bowels of WMI to figure out how to make it work. Look for the option to name the deployment share in a future release.

Microsoft released Windows 10 2004 late in May, and WIM Witch v2.1 adds support for this new version. While everything should work, this version of Windows 10 is still new, so it’s possible that a few bugs need to be worked out. If bugs are encountered, please let me know. WIM Witch is nothing without her users, especially those that provide feedback!

The Prelude to Greatness

For those who have already tried out v2.1, the best feature is not obvious to discern. There are no check boxes, fields, or configurable items to give it away. Besides the mentioned features above, there is nothing new in the WIM Witch UI.

V2.1 introduces an automatic function that catalogs every configuration selected when building a new or updating an existing ConfigMgr OS Image. After either a new CM image is created or an existing one updated, a folder will be created in the WIM Witch folder structure.

In this folder, a file is saved that is named after the Package ID of the image. This file will now be automatically loaded when an image is chosen for updating, so long as WIM Witch has already created or updated said image. If the image file with the Package ID has not yet been created, the old default behavior will take precedence.

This means that admins who are using CM integration no longer have to select a Source WIM, choose customizations, or select items each time they wish to update an image. Every chosen option from the previous build will be loaded automatically. Any changes made to the customizations will automatically be saved when the new build is completed.

In effect, admins just need to select the image to update and hit “Make It So”.

So besides saving the average Admin 5-10 mouse clicks, why is WIM Witch remembering the selected customizations so exciting? This functionality lays the groundwork for ConfigMgr console integration.

All that will need to happen from the console is to select an image, and have the as-of-yet-unwritten plugin pass the Package ID to WIM Witch as a command-line parameter. She’ll know exactly what to do. Granted, this is easier said than done. I need to figure out how to write a console plugin first, and that is likely to take some time. But like everything else in WIM Witch, I didn’t know how to make it happen until it was written, and this challenge is just the same. And its a challenge I have been waiting to tackle since I started writing her.

This version, while small on new features for the admin today, has paved the way for excellence in the future. I am excited that I have brought her this far, and I can’t wait to have her fully CM integrated in the near future.