In my current work, we where faced with a global computer replacement program. Computers older than 3 years would have to be replaced by new hardware. In our case, installing a bare-metal system without migrating the users settings and documents was not an option. We had to migrate a specific user for a specific computer. So we decided to take advantage of ConfigMgr 2012 that we had in place and build a replace scenario for the new hardware. The ConfigMgr hierarchy consists of a stand-alone Primary Site server with several Secondary Sites for each region of the world. 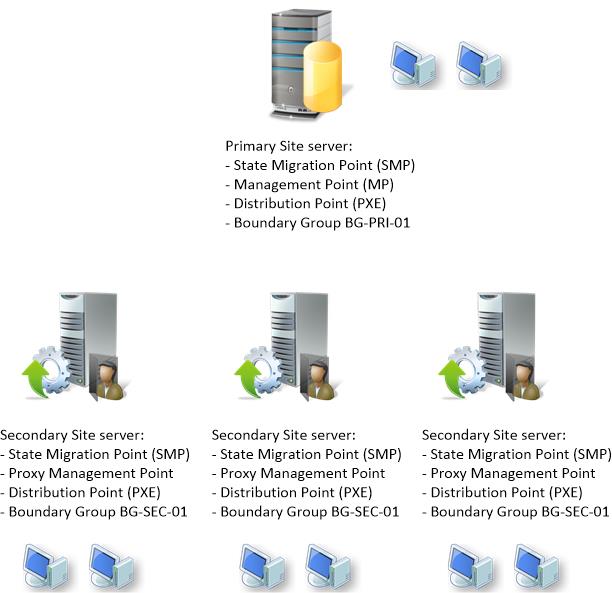 In order to migrate the user data, you’d need to verify that you have a  USMT package containing the USMT files from the Windows ADK. This is created by default and called User State Migration Tool for Windows <version>. If you don’t have that package, create a new package without anny programs and the content source pointing to:
C:\Program Files (x86)\Windows Kits\<version>\Assessment and Deployment Kit\User State Migration Tool
The above path assumes that you’ve installed Windows ADK in the default path.

You’ll need to create two seperate Task Sequences so that you have the option to first backup the old computer, storing the users migration data (documents and settings) and then on the new computer restore the migration data during the installation phase. In this post we’re gonna reference to the two task sequences as: 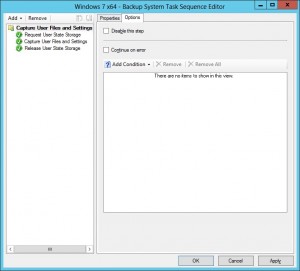 In this task sequence we have 3 different steps. Each step is configured as the following: 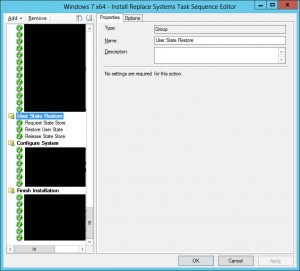 This task sequence is basically a copy of our main task sequence that we use to deploy operating systems to bare-metal systems. Except for 3 extra steps, which restores the users migration data onto the new computer. You should add the 3 steps after the Setup Windows and ConfigMgr step. See below how the steps are configured:

When the State Migration Point has been added to each necessary Site System Server, the task sequences have been created and updated, the USMT package is distributed to all necessary DP’s, we can then go ahead and create a computer association. This is the most crucial part, and where we need to get everything right. What we’re doing here is that we’re creating an association between the old computer that is about to be replaced and the new computer that we’ll install and migrate the user data to. You can do this in different ways. One of them is to use the ConfigMgr console. The process is described below:
1. Right-click on Devices in the Assets and Compliance view and choose Import Computer Information. Follow the wizard to import the new computer into the ConfigMgr database.
2. Right-click on User State Migration in the Assets and Compliance view and choose Create Computer Association.
3. On the Computer Association tab, specify the old computer as the Source computer and the new computer as the Destination computer.
4. On the User Accounts tab, select Capture and restore specified user accounts and add the user account to be migrated between the computers.
This is fairly simple, but it requires access to the ConfigMgr console and the necessary permissions to import a computer object and then create the association. Instead we choose another approach, Orchestrator, PowerShell and an End-User Portal. I’m not gonna go through all the steps to setup an End-User Portal for Orchestrator, but I encourage you to take a look at Eupsco. It’s a free End-User Portal that is easy to install and works well with Orchestrator. This is how we set it up described at a high level:
1. Installed Eupsco on our Orchestrator server.
2. Created a Runbook in Orchestrator and with the PowerShell script below.
3. Created a service in Eupsco pointing to the Runbook.
Now anyone with the proper access (an Active Directory group) could browse to the Eupsco Portal, execute the Runbook and the computer association will be created automatically. In the script below, some of the variables would have to specified hard in the script, and some from Published Data in the Runbook. Here’s how we did it:
$SiteServer = “<Primary_Site_Server>” (specied in the script)
$SiteCode = “<Site_Code>” (specified in the script)
$MigrationUserName = “<Domain>\” + “<UserName>” (domain should be specified in the script, while UserName should be a string from Published Data in the Runbook)
$DestinationComputerName = “<Destination_ComputerName” (Published Data from the Runbook)
$DestinationMACAddress = “<Destination_Computer_MACAddress>” (Published Data from the Runbook)
$SourceComputerName = “<Source_ComputerName>” (Published Data from the Runbook)
$CollectionName = “Replace – Destination Computers” (specified in the script)

How it all works together

When everything is setup and configured for the Replace scenario, the process is quite simple.
1. The user runs the Windows 7 x64 – Backup System task sequence from the Software Center.
2. The task sequence starts to capture the specified user’s documents and settings and stores the data on the State Migration Point.
3. A ConfigMgr administrator creates the new computer object by importing it to the ConfigMgr database and at the same times creates an association between the old computer and the new. If instead the script is used from either a Runbook or by just running it directly, all the necessary components is created automatically.
4. An administrator/help desk personal initiates the Windows 7 x64 – Install Replace System task sequence either by PXE or by boot media.
5. The task sequence installs the new computer and restores the specified user’s documents and settings.
That’s all you have to do. Now go try it out in a lab environment! If you have any question about specific parts of this post, write a comment or drop me an email and I’ll answer them as soon as possible.