== PLEASE NOTE == Some of the details and features in this post have been superseded. Please review our Modern Driver Management and Modern BIOS Management solutions for up to date information.

To give you a bit of background to this post, Nickolaj and I sat down back in February and discussed some of the pain points in relation to OS deployments. The main theme that community members had was around the area of driver management, with conflicts over driver package best practices, performance issues and general overhead for the ConfigMgr administrator.

Back in late March of this year we released our “Modern Driver Management” method of dynamically managing driver deployments as part of your OS deployments (https://msendpointmgr.com/2017/03/29/modern-driver-management-using-web-services-during-osd-with-configmgr/). The process works by utilizing a number of tools we have developed to fully automate the process of driver management from the download step right through to deployment at the client.

Since then we have been thinking about some of the issues and points raised by the community around the area of BIOS deployments, and how best to handle them. Dell has been pushing their Flash64w flash BIOS tool recently allowing for BIOS upgrades during the WinPE phase of your OS deployment. Now with additions to all parts of our “Modern Driver Management” engine we are pleased to support the automatic deployment of Dell BIOS updates in your task sequence using our “Modern BIOS Management”.

Oh and for those of you who were looking for Lenovo and HP, we are working on it and we should be publishing a Lenovo update shortly and hopefully following up with HP at a later date.

How Does It Work?

The process is broken down into three key steps;

This initial step uses our “Driver Automation Tool” which currently supports a number of manufacturers (Dell, HP, Lenovo, Microsoft & Acer) for drivers and a subset (Dell/Lenovo) for BIOS downloads.

It is vital that the tool is used in this process as it standardizes the naming convention of packages and includes tools which we will utilize later on in this process.

Note: Version 3.8 should be used as a minimum as there have been changes to the BIOS update process. The tool can be downloaded from Technet – https://gallery.technet.microsoft.com/scriptcenter/Driver-Tool-Automate-9ddcc010

Once downloaded you should end up with something like this in your ConfigMgr console:

Modern BIOS Management solution requires the ConfigMgr WebService to be installed in your environment, with the minimum of version 1.3.0. Detailed installation steps can be found in the documentation included in the package, downloadable from the following link:

The web service is a key function to this process as it will be used during the task sequence to query the available packages from ConfigMgr (using the GetCMPackage function) and through logic in a PowerShell script, match available BIOS packages to the model and manufacturer of the machine being deployed.

Adding the steps for Modern BIOS Management could not be simpler. Download the following scripts required from the following:

The Invoke-CMDownloadBIOSPackage script will automatically detect the computer model and manufacturer, calling the ConfigMgr WebService for BIOS packages matching those values. In the case of multiple packages that match the criteria, the most current package will be selected based upon the SourceDate property of the package object.

If there’s no matches at all, the script will exit with a return code of 1, causing the deployment to fail. In terms of logging, the script is writing to a separate log file called BIOSPackageDownload.log located in the same directory as the smsts.log file at the time of operation.

Follow this four step process to implement the script referenced above: 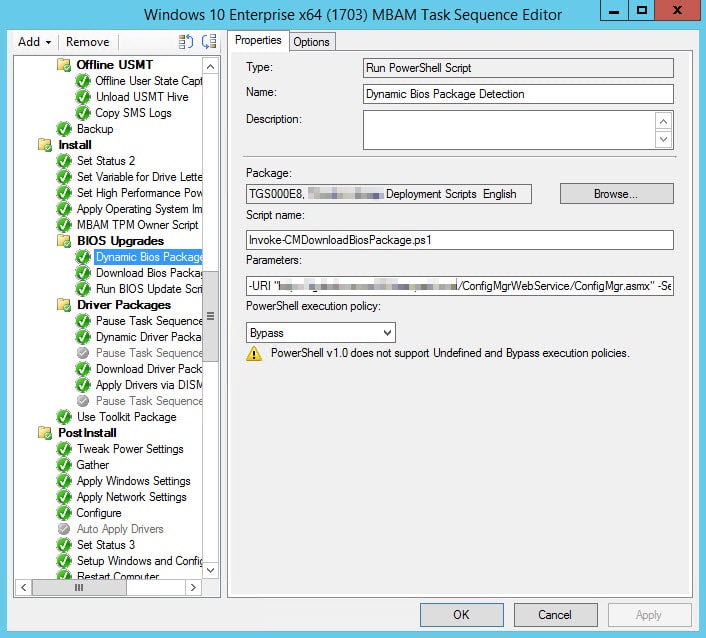 Note: Some older Dell models do not support Flash64W, so if a failure code other than “2” which indicates a reboot is detected, a task sequence variable (SMSTSBIOSInOSUpdateRequired) is set.

You can then use this as variable as a condition to re-run the powershell script in the OS section of your task sequence, as the script will detect it is no longer in WinPE and attempt to update the BIOS using the legacy method.

Below is a capture of the Modern BIOS Management process running on a Dell Latitude E5470:

Nickolaj Andersen
Principal Consultant and Enterprise Mobility MVP. Nickolaj has been in the IT industry for the past 10 years specializing in Enterprise Mobility and Security, Windows deployments and Automation. In 2015 Nickolaj was awarded as PowerShell Hero by the community for his script and tools contributions. Author of ConfigMgr Prerequisites Tool, ConfigMgr OSD FrontEnd, ConfigMgr WebService and a frequent speaker at user groups.