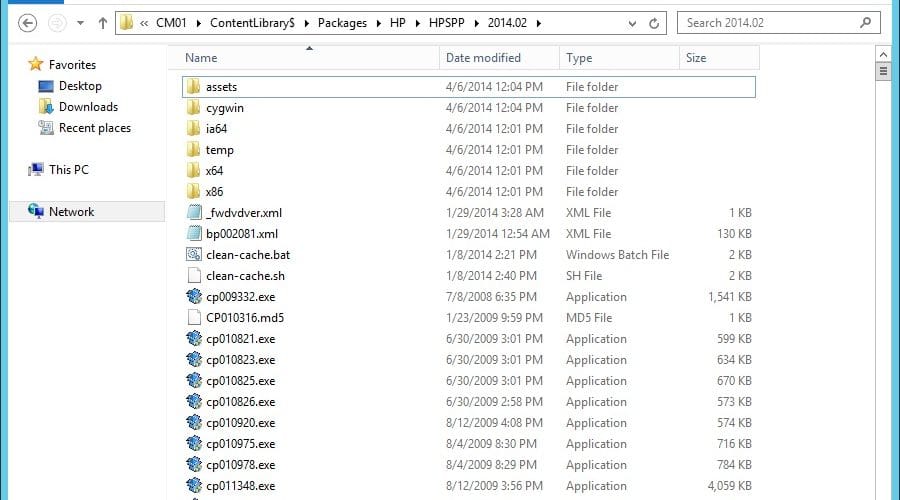 Install HP Service Pack for ProLiant during OSD with ConfigMgr 2012

If you’ve ever worked with HP ProLiant servers before, you’re probably familiar with the HP Service Pack for ProLiant (HP SPP). As I’ve only worked with Dell servers before (it’s kind of fun that I’ve not come in contact with HP servers managed with ConfigMgr up until now), I’m used to use the DRM (Dell Repository Manager).

Get your hands on the HP SPP

As of writing this post, the latest version of HP SPP is 2014.02 and can be downloaded from the link below.
https://h20392.www2.hp.com/portal/swdepot/displayProductInfo.do?productNumber=spp_2014.02.0
You’d need to login to be able to download the ISO. If you don’t have an account yet, it’s a pretty fast sign-up process.

As in this post I’ll be focusing on using the HP SPP for Windows Server deployments, and for that we don’t need all the linux-based files that comes along as well. Since the servers that will be deployed with ConfigMgr needs to download all the content in the package that we’ll create later, it would be wise to keep the data to a minimum. Once you have downloaded the ISO, mount it and copy the folder below and all of its contents to a folder of your liking. I’ll be copying the files to G:\HP.
<driveletter>\hp\swpackages
Open an elevated PowerShell console and run the following command:

When you run the command above, you’ll remove all of the unnecessary files that we won’t be needing when deploying the HP SPP for Windows servers. The orginal size of 3GB+ has now been decreased to about 1.2GB instead. It’s still a lot of data, and perhaps there could be some more cleaning done, but I’ll leave that up to each of you to decide on that.

Now that we have the files we need, it’s time to move them to the Content Library on your Primary Site server (or wherever your Content Library is located). In my lab environment, I’ll be using the following location for the HP SPP files:
\\CM01\ContentLibrary$\Packages\HP\HPSPP\2014.02
Move all of the contents of G:\HP\swpackages to the location in the Content Library. 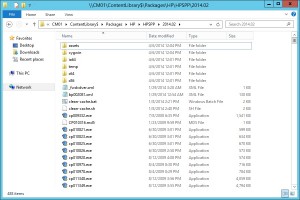 Since HP has decided to go their own way when it comes to exit codes, we need to have a wrapper interpreting the return codes from the installation. This can be accomplished by using the following script:

If you take a look at the script, we have a variable called sSetupCommand that contains the actual setup command that will be executed. Here you’re able to specify the command line parameters that are supported by the HP SPP. I would encourage you to look them up so that you use the correct ones that suites your environment.
Save this script as InstallHPSPP.vbs and copy it to the same location that you copied the HP SPP files in your Content Library.

I’ll assume that you know how to create a Package in ConfigMgr, so that process will not be described here in this post. What’s important though when you create the package is to specify the content source and not to create a Program. You could of course create a Program if you wish, but I’ll be leveraging the Run Command Line step in the task sequence instead of the Install Package. Also, remember to distribute the package to your Distribution Points. 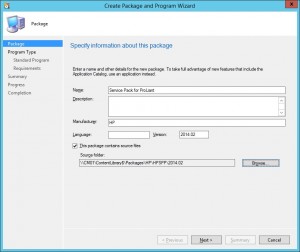 When editing the task sequence, it’s important that we add the Run Command Line step during the Online phase. That means that we have to add it after the Setup Windows and Configuration Manager step at some point. Here in my lab environment I’ve edited my Windows Server 2012 R2 Standard – Install task sequence and added a Run Command Line step with the following command line:
cscript.exe InstallHPSPP.vbs
In addition to that I’ve also selected to use the package that we created earlier. 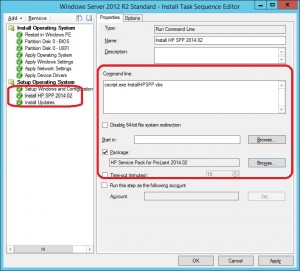 Now when you go and deploy this task sequence to one of your servers, the HP SPP installation will take care of all your driver installations and additional software that it finds suitable for your server.