If you’ve played around with the Technical Previews of ConfigMgr vNext (now called ConfigMgr 1511), you’ve most likely seen that there’s a new Software Center experience. Microsoft has combined the new Software Center experience so that applications deployed to either users or devices, will now show up in the new Software Center. How it previously worked was that when you deployed an application (not package) to a user, it would end up in the Application Catalog. When the deployment was targeted for devices, it would be visible in the Software Center. This led to some confusing in the beginning, but customers started to learn how to implement rather quick once the message was clear.
What should you do if you’ve already incorporate the Application Catalog in your organization and your users heavily rely on that to install applications? I’d advise that you test the new Software Center in a pilot group, but also keep in mind that users are creatures of patterns. Change something to many times, and they’ll get confused. However, I’m a strong believer in combining user and device application deployments into a single glass of pane for the user, you should not just simply enable this new setting as it may impact your application deployment processes etc. 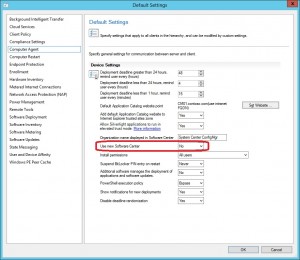 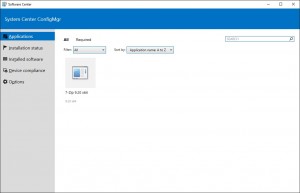 Notes from the field

When I was playing around with this new setting, I enabled it before the Client Upgrade feature had upgraded all of my clients to 5.00.8325.1000. For some reason when I started Software Center from the start menu, the old Software Center was loaded instead of the new. I reinstalled the ConfigMgr client on one of my clients, but that didn’t help. I then went back to my custom Client Setting where I had first enabled the new Software Center in, disabled it and saved the custom Client Setting. I then enabled it again and saved the custom Client Setting once again, pulled the machine policy on one of my clients, and the new Software Center was now loaded instead of the old. I’m not really sure why this is, but it would seem that the Software Center shortcut is not updated unless the client is running the latest version (5.00.8325.1000).
On another note, if you’ve distributed custom shortcuts to C:\Windows\CCM\SCClient.exe, make sure that you update those shortcuts to the correct path of the new Software Center, which is C:\Windows\CCM\ClientUX\SCClient.exe.
According to the TechNet documentation for ConfigMgr TP, both Application Catalog Site System roles are required for user targeted application distribution to appear in the new Software Center. We’ll have to see what the documentation says for the RTM release, but my instincts tell me they’ll be the same. You can read more about that here:
https://technet.microsoft.com/library/dn965439.aspx#BKMK_SC