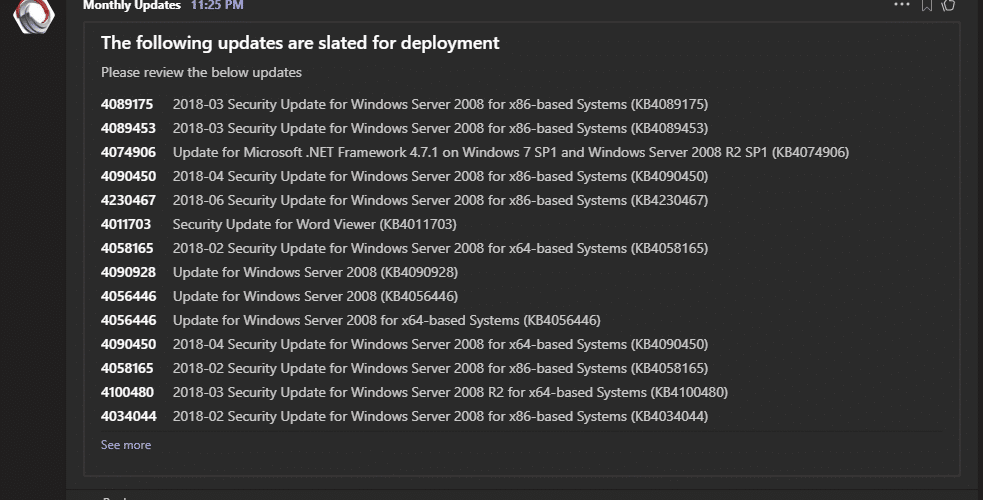 Every month when patches come out I have the annoying task of gathering up all of the patches that we will be releasing and sending out an e-mail with the list of all of the patches. Well, while I haven’t quite fully removed the need for me to do that yet I certainly found a way to make the process much more convenient for initial review by the ConfigMgr Engineering team by sending all of the new patches pulled into our ADR’s to Microsoft Teams. This is a great way to get a first glance at what we are going to deploy in the coming days.

First we establish our workflow, WSUS Syncs, our ADR’s run, the results are compiled into the monthly Pilot SUG and that SUG is then polled for membership and the result sent to teams. The below function can be used to get the membership of any SUG in your environment and then send that list of updates to teams!

In order to do this we’ve got three basic requirements.

First we need to get the information out of the SUG we can do this a couple of different ways I think the simplest way is to use the ConfigMgr Cmdlet library, even if getting the information from SQL is faster and more efficient.

So within the ConfigMgr PowerShell cmdlet library we have a few built in cmdlets that one would think would make this entire process really simple however there are a few ‘gotcha’ items to watch out for.

The above seems like a normal line of PowerShell, should simply get the CM-SoftwareUpdateGroup and pass the value of $_.CI_ID through to CM-SoftwareUpdate which would return all update objects with a groupID that matches your update group. I’m not sure why at this point but when you attempt to pipe values to the cmdlet CM-SoftwareUpdate the ‘UpdateGroupID’ parameter won’t accept a piped value if you try you get a cannot bind argument to parameter error.

That means we’ve got two ways to attack this, we can either break it apart to no longer be a one liner, or we can make things a little more complicated and a little less efficient and still get a one liner solution. While I typically try to use one liners where possible I think this is a great example where using a function and breaking something apart into multiple lines is better. If you want to do this as a one liner you can its just less efficient and can be accomplished with a simple for each loop.

While the above works its not very efficient as it’s re-running the command to get the software update object every single time through the loop so we can attack this two ways we can still do a ‘one liner’ or we can make a function if we did the one liner approach it would look something like this.

It’s much faster than iterating through and getting the full objects and of course we could then turn this into a function that returns the above information pretty simply with just a few more bonus lines. Now when I say this is more efficient to break it apart into two separate pieces I mean the difference between 16 seconds and 127 seconds doesn’t seem like much but its almost eight times better and could be the difference for exceeding run time in some cases and its cheaper if you pay for processing time.

These are the building blocks to send a message about what updates you’re going to release to your environment. With a little more nudging about we end up with a couple of functions the first one gets a list of the updates from the SUG of your choice and the second then sends those results to Microsoft Teams via our friend the webhook.

Then we can send the information returned to teams this function is a little messy as I originally intended to keep it multi-purpose but as I dug more and more into it I found the only good way to really present the data was using a hash. I may come back at a later date and bundle these two functions together and simply make the send message to teams an optional component of a larger function.

In the end we get the following output in PowerShell

And then something that looks like this in Teams.

I hope you enjoyed this! If you want all of the code in one spot, its a part of the CMUpdateManagement Module in the SCConfigMgr Github as usual I expect this module to grow and change as I add things to it around managing updates.

Jordan has been working in the Industry since 2009. Since starting he’s worked with Active Directory, Group Policy, SCCM, SCOM and PowerShell. Jordan most recently worked in the healthcare industry as an SCCM Infrastructure Team lead supporting over 150,000 endpoints. Jordan currently works as a Senior consultant for TrueSec Inc in the U.S. Most recently his focus has been in SQL Reporting for SCCM, creation of PowerShell scripts to automate tasks and PowerBI.