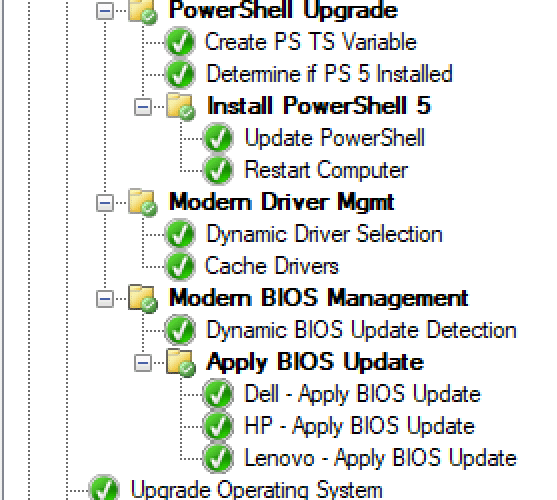 With multiple deployments for task sequences gaining in prominence as a process for In-Place Upgrades, this post will demonstrate a different way to leverage the Modern Driver Management solution in this scenario while not relying on the CCMCache. In the inadvisable event that an In-Place Upgrade is to be used in a Windows 7 to Windows 10 migration, upgrading PowerShell to ensure functionality of Modern Driver Management scripts will also be documented.

The idea behind having multiple deployments to handle In-Place Upgrades (IPUs) is to separate out the preparation functions, such as performing a Compatibility Scan and content pre-staging, from the upgrade process itself. This allows for better error handling, less failures, and shorter upgrade times. For an in-depth look at the process and what can be done with it, check out Gary Blok’s write up.

While Gary’s process is impressive, it’s a little much for the purposes of demonstrating the process of managing drivers and caching with the Modern Driver Management solution. In this write up, two Task Sequences will be used:

Modern Driver Management was not originally designed for this type of process, which is demonstrated by the documented parameters we can pass to the Apply Drivers script. What is listed on the documentation is Bare Metal, OSUpgrade, and DriverUpdate. And while all three of these options serve their purposes well, they don’t quite fit the bill for multiple Task Sequences.

In the description section of the Invoke-CMApplyDriverPackage.ps1 (Apply Dynamic Driver) script , there is a PreCache option.

To understand why the OSUpgrade and PreCache parameters are not sufficient on their own, it is important to understand how they function.

The “OSUpgrade” parameter downloads the drivers to the “C:\_SMSTaskSequence\DriverPackage\[PackageID]” folder, then it sets the “OSDUpgradeStagedContent” Task Sequence Variable to the path it downloaded the drivers to. This allows the Upgrade Operating System step to know where to look for the new drivers. When the Task Sequence completes, the downloaded drivers are deleted.

To solve these limitation, all that is required is a little bit of PowerShell.

The “In-Place Upgrade – Compat and Cache” has the Driver Script configured with the “OSUpgrade” parameter enabled.

This will allow the drivers to be downloaded and evaluated. After the drivers are applied, a Run PowerShell step will need to be added with the following lines:

What these lines do is create a folder named “C:\Win10DrvCache”, continues if the folder exists, and then copies everything that can be found from the original download folder to the new folder. This preserves the drivers in a known location so they can be leveraged during the next Task Sequence.

In the “In-Place Upgrade – Apply Upgrade” Task Sequence, a Set Task Sequence Variable step needs to be added before the Upgrade Operating System step. The variable is “OSDUpgradeStagedContent” with a value of the folder we copied the drivers to.

This will allow the Upgrade Operating System step to access the drivers.

At the end of the Upgrade Task Sequence step, an additional PowerShell step should be added to remove the cached drivers:

If this process is to be used in a Windows 7 to Windows 10 IPU, there may be some required remediation if the Windows 7 systems did not have PowerShell upgraded during their life-cycle. The installed version of PowerShell in Windows 7 SP1 is 2.0, and this version does not allow the MDM scripts to run.

Upgrading PowerShell in Windows 7 requires a KB to be applied that upgrades the Windows Presentation Foundation (WPF), and can be found here (https://www.microsoft.com/en-us/download/details.aspx?id=54616).

Download the appropriate MSU file, create a package, and provide a program with the following command:

To implement in the PowerShell upgrade into the Task Sequence, some detection and logic will be required to prevent failures if PowerShell has already been upgraded. This can be performed in the following fashion.

Before the steps that run the Modern Driver Management Script, create a Task Sequence Variable called “PSNotInstalled” and set its value to “True”

Next, create a second Set Task Sequence Variable step with the same variable name as before, but with the value “False”

In the Options Tab of this step, create a WMI Query to determine if the KB has been installed. Provide the query with the following criteria:

Next, create a Group with the following Task Sequence Variable condition. This will allow the group to run if the KB isn’t installed:

In this Group, add the WPF upgrade KB Package and a Restart Computer step.

Once all of this is complete, it should look something like this:

Now that PowerShell has been upgraded, the Modern Driver Management solution should run as expected!

It’s worth noting that the Task Sequence Engine does not by default log the parameters passed to PowerShell in the SMSTS.LOG file. This is a feature and not a bug. The idea is that credentials or other sensitive information passed to PowerShell will not be recorded in plain text. During the testing of the process, it may be advantageous to enable the logging of parameters. To do this, simply create a Set Task Sequence Variable step, enter “OSDLogPowerShellParameters” as the variable, and the value set to “True”.

For reference, this is what the”In-Place Upgrade – Compat and Cache” Task Sequence should look like if every step discussed has been implemented:

Below is what the”In-Place Upgrade – Apply Upgrade” Task Sequence should look like: