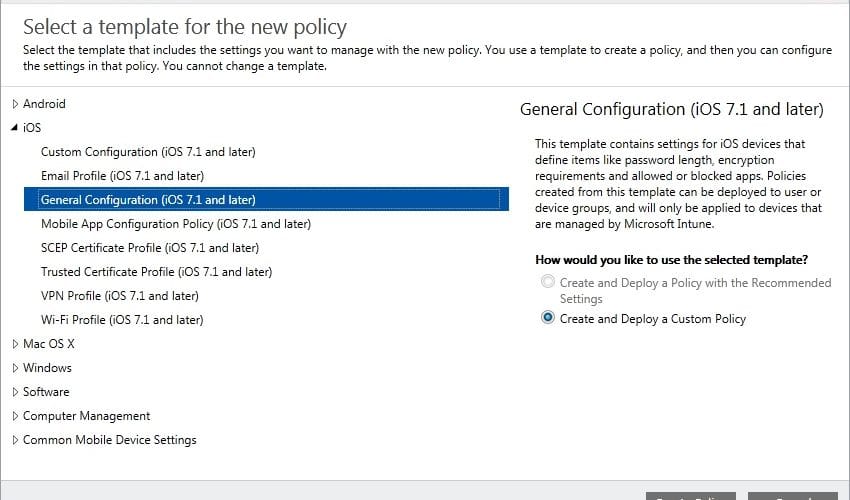 For a detailed explanation of all the settings that you can control with a General Configuration Policy, I suggest that you take a look at the documentation on TechNet:
https://technet.microsoft.com/en-us/library/dn818906.aspx

There’s not really much to mention here since Microsoft Intune does a great job in telling you exactly what version and above of iOS each setting requires. In general, you should be running at least iOS 7.1 or later to take advantage out of most of the settings available.

NOTE! If you decide to actually prevent the usage of the App Store in production, be aware that you’ll not be able to deploy deep links or even Managed apps since they will simply not install (I was not able to find any documentation on this, but found this out when testing this functionality in my lab).

4. Name your policy, for instance iOS – Disable App Store and give it a description.

5. Scroll down to the Applications section (or click in the left pane) and locate Allow application store (iOS 7.1 or later). Click on the slider to turn on the setting and set the value to No.

8. Select your user or device group (in this case I’d be selecting my IT Department user group), click on Add and then click OK.

You should now have a new General Configuration Policy for iOS named iOS – Disable App Store.

Let’s take a look at the end-user experience before our General Configuration Policy has been applied. As you can see, the App Store is available for the user to access:

Once the General Configuration Policy has been applied, the App Store disappears: