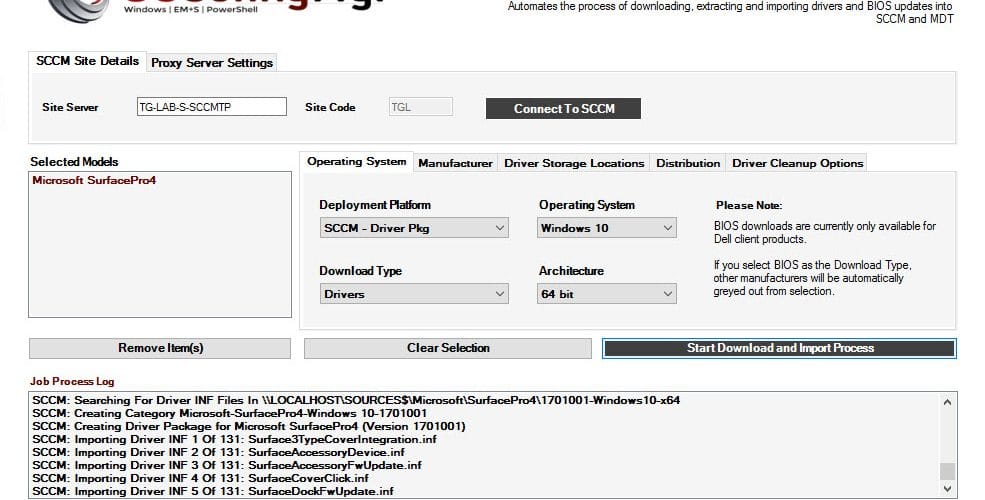 This has been a highly sought after feature due to the update in the use of Surface / Surfacebook models in enterprise environments. Thanks to assistance from Microsoft engineer Carl Luberti, an initial XML was delivered to us with direct links to the surface downloads. A re-worked version of the XML now provides this functionality, and is presently hosted on our own server, Carl is hoping to publish this XML feed directly soon though.

Acer currently provide an extensive list of driver packs for their client products on their SCCM site (https://www.acer.com/sccm/).

Their driver package format uses a self extracting exe to extract and import drivers into SCCM, unfortunately Acer don’t appear to offer silent extracts, so in order to extract the drivers 7-zip must be installed on the system which the automation tool is run.

The script calls the 7z.exe command to silently extract the Acer drivers, hence the requirement. Should anyone from Acer wish to contact us please, drop us an email as we would like ultimately to remove the requirement for third party software.

Earlier on this year, Dell announced they had released a new utility which allowed for updating the BIOS during the 64bit WinPE environment. In order to take advantage of this, we have updated the script to download and extract the utility, and include it in BIOS update packages. The automatically generated PowerShell script now detects whether it is running in WinPE or not and applies the required switches, a switch has also been added for a BIOS password.

To cater for those of you who want to maintain both driver packages and standard packages containing the drivers for the same model, we have updated the package path to include a sub-folder underneath the manufacturer folder, labelled “DriverPkg” and “StandardPkg”.

If you are new to PowerShell this might be helpful for you, the update now includes a C# wrapper exe (courtesy of Nickolaj) which launches the script in a PowerShell window (execution policy is bypassed). Just launch the DriverDownloadTool.exe file from the same folder as the script.

Some of you had reported issues with the use of the user temp folder, due to restrictive GPO’s being enforced. In this build the folder used for downloading CAB’s and storing the log file has been relocated to a SCConfigMgr folder located within the folder which the script is stored / run.

Below is a video of the Driver Automation Tool running starting the process of downloading and packaging drivers for Acer, Dell, HP, Lenovo and Microsoft models. The driver packages are packaged as standard packages for use with our Modern Driver Management process;

After the entire process had completed, the SCCM console now has all the selected drivers available;